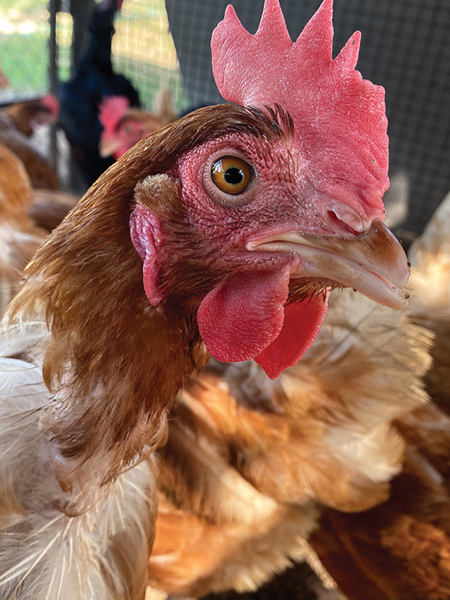 The arrival of fall is marked by shorter days, and that reduced daylight triggers the annual molt in backyard chicken flocks.  Each fall, starting when they’re about 18 months old, chickens lose their feathers and grow in nice, shiny new feathers in preparation for winter.

Over the course of spring and summer, feathers can break, get dirty, fall out or be plucked out by other flock members — causing them to not really be in tip-top shape. A nice new set of feathers ensures the bird can keep itself warm through the cold months.

Hens and roosters both molt. The hens generally stop laying eggs at some point throughout the molting process, while roosters can become impotent. (Makes sense — nobody wants to be raising young ones while they’re working hard to regrow their feathers and stay warm!)

What to look for (and what to do) during molting season

While the length of the molt varies widely between various birds, the pattern always stays the same: It starts at the neck, moves down the neck to the back, breast and wings, and then finishes with the tail. The entire process can take weeks or even months. Your better layers will tend to molt earlier and faster, while poor layers might slowly drop feathers for months. Some chickens seem to lose all their feathers almost overnight, while in others it’s barely noticeable that they’re molting at all.

There generally won’t be bare patches during a molt. New feather shafts push out the old feathers, so you should be able to see the new waxy shaft already poking through the skin surface anywhere feathers have dropped. These new feather shafts are filled with blood which dries up as the feathers break free from the shaft and unfurl.

There’s not much you can (or need) to do for your chickens during the molting season other than leave them alone. I would imagine that growing in feathers  can be uncomfortable, and chickens don’t like to be handled or picked up while they’re molting.

Their demeanor can change and you might even think they’re sick because the chickens might be hiding in one corner not moving much. But this is pretty normal. It’s almost as if they know how horrible they look and don’t want anyone to see them! But soon enough they will have grown in shiny new feathers and be back to their old selves.

How Better Feather can help

It can be beneficial to provide your flock with a bit more protein during the molting season. I switch to a higher protein feed like Home Fresh® Better Feather™ and always see great results. Better Feather is an 18% protein, high-energy, calcium-fortified grain diet formulated specifically to support feather growth and egg production in layers as they go through a molt. It's a complete, balanced diet, so no additional nutrient supplementation is required. Of course, your flock will always appreciate a few snacks such as sunflower seeds or dried mealworms or grubs this time of year too!

I always feel like we’re racing the clock around here in the fall. I start seeing dropped feathers in late August/early September and worry that my chickens won’t finish up by the time the temperatures drop below freezing, but somehow it all works out and they head into winter with a new set of beautiful, glossy feathers.

Winterizing Your Chicken Coop and Run

While chickens are extremely cold hardy and do well in most climates there are a few things you can do to keep your birds more comfortable during the winter months….

Introducing new flock members to an existing chicken flock can be challenging. Chickens often don’t take kindly to newcomers who might threaten their place in the pecking order. Learn about…