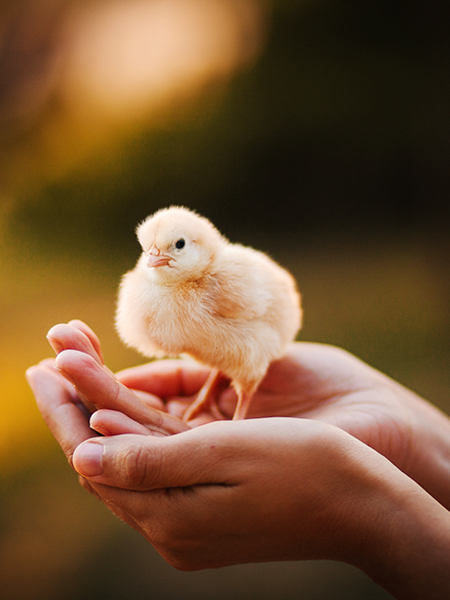 In the wild and even among domestic livestock, babies are born in the spring. This makes sense. When chicks are young, they’re small enough to fit underneath, or snuggled up next to, their mom to keep warm. This is important because they aren’t able to regulate their own body heat at that age.

As the babies grow and the temperatures warm up, they can gradually begin to venture out. By the time they’re too big to fit under mom, they have their feathers and can keep themselves warm.

Most chick hatcheries start taking orders right around the holidays, but don’t begin shipping baby chicks until after the new year. Depending on where you live, you might have to wait well into the spring to receive your chicks, or order a higher minimum number of chicks to ensure they can keep warm during their journey.

Receiving your chicks in late February or March is quite common. This is when we would generally get chicks when we lived in Virginia. Now that we live in Maine, I prefer to wait until late April or even May to get chicks because it’s so much colder here. It’s not unheard of to get snow in May, and I would rather not have my chicks living in the house with us much past six or eight weeks old!

Those new to chicken keeping often don’t realize just how fast chicks grow. Before long, you'll be struggling to keep pigeon-sized (or larger) birds in the house because it’s still too cold for them to go outside.

A good way to gauge when you should start with your chicks is to count back eight weeks from when your overnight temperatures aren’t dipping much below 50 degrees on average. And that’s a good time to plan on getting baby chicks. This timing should work perfectly to move them outside right about when you realize you’re going to need a much bigger brooder.

The nice thing about getting baby chicks each spring is that they generally will start to lay eggs when your older hens start molting and slowing down for the winter, so you’ll have a steady supply of eggs right through until spring.

Recently however, fall chick days have become popular. Hatcheries and feed stores are now offering chicks in the fall in addition to the spring.  In warmer climates that don’t experience below-freezing temperatures or snow and ice, it’s reasonable to start baby chicks almost year round.

But in colder climates, I would caution those who are thinking about starting chicks in the fall. As the temperatures drop, you’ll likely find yourself with youngsters that will need heat — and that means being in the house far longer than they would if it were spring and the temperatures were warming up as the chicks got bigger.

Also, if you have older chickens, it’s far easier to introduce new flock members if you can let them out to free range on neutral territory. But in the winter, trying to integrate new flock members when they’re locked in the coop for 14 or 16 hours a day just isn’t a good idea.

Think carefully before you commit to fall chicks if you live in a colder climate. There’s a reason why animals have their babies in the spring!

Getting Your Chickens to Get Along

Learn about steps you can take to make adding new chickens to your flock a smooth and stress reducing process.

Keeping Your Chicks from Getting Sick: Top Health Concerns

It’s always good to at least be aware of these common chick health concerns.

How to Pick the Best Baby Chicks

Here are some tips on what to look for and how to decide what chicks are right for you to get your own Chick Days going in the right direction.