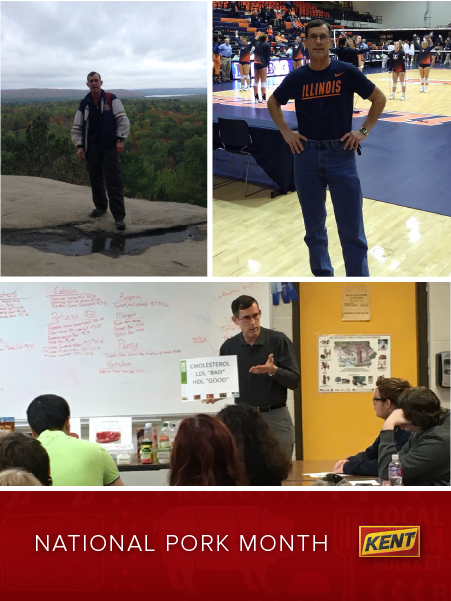 Michael Edmonds has been studying swine nutrition pretty much his whole life. For the last 30 years, he has conducted research on farm (and from a strategically-cluttered desk) at Kent Nutrition Group. All of his work – the tests, trials and analysis – are directed toward one main objective: helping producers raise healthier pork more efficiently.

“We’re always working to optimize,” Edmonds says. “We’re always trying to find something that will be give producers an edge in raising better pork, so they can make more money and feed people better products.”

Edmonds spends a lot of time on KNG’s 650-acre Research Farm, primarily in the swine nursery, where 500 baby pigs arrive every nine weeks. There he works on product formulations and feeding trials, evaluating ingredients over the next 21 weeks. The pigs are raised from roughly 13 pounds all the way to their 260 – 270-pound market weight.

Years of research – and the ability to conduct trials in a real-world setting – proved to be invaluable last year, when packing plants shut down and producers were forced to hold pigs much longer than usual. They needed to slow down the growth rates, and quickly. Edmonds was able to recall his thesis paper from the University of Illinois, where he worked with amino acids to create imbalances in swine that caused them to eat less feed.

“They’re basically on a diet, so they eat less and grow less,” Edmonds says, noting that KNG was in the same boat as producers at the time, because they couldn’t send their pigs to market either. “We started testing DL-Methionine at high levels and actually got our pigs to lose weight. It was pretty exciting that I got to do something like that in my career.”

It also demonstrates KNG’s commitment to helping producers, he says. “We weren’t selling anything to them, but we were helping them when they needed it the most. We came through with a solution. That’s what it’s all about.”

Michael Edmonds is a self-described “health nut” who enjoys giving nutrition talks (for humans) at schools, churches and various community groups to help people understand the ins and outs of a healthy diet. He lives in Muscatine, Iowa, and enjoys camping, hiking and exercising – particularly if it involves pickleball.