Skip to content
Keeping Your Chicks Healthy: Be Aware of These Common Health Issues 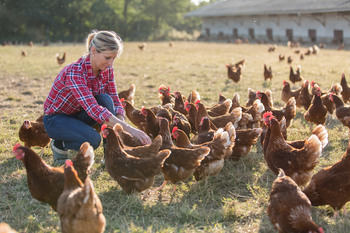 Chicks purchased from a reputable feed store or hatchery likely won’t face major health issues, but there are still some things that can go wrong. It’s always good to at least be aware of these common chick health concerns.

Coccidiosis is a parasitic disease of the intestinal tract that causes diarrhea, bloody droppings, ruffled feathers and lethargy in baby chicks. Highly infectious, it is the No. 1 cause of death in baby chicks, and usually occurs within the first five weeks. As the chicks age and are exposed to small amounts of the parasite, they will develop a naturally immunity.

The best defense against coccidiosis is proper brooder management. Wet or caked feed and litter should be removed daily and the water refreshed at least once a day. Medicated chick feed can be fed for the first 8 weeks of a chick’s life to protect the chicks while they are building a strong immune system. Vaccinations are also available.

Adding probiotics to the chicks’ diet helps boost the good bacteria in their bodies, and oil or oregano and cinnamon are being studied as natural antibiotics, along with apple cider vinegar, green tea and garlic. Adding these foods to the chicks’ diet can help build strong immune systems so they are hardy enough to combat any coccidia they encounter in their environment.

Marek’s Disease causes paralysis in chickens, which leads to malnourishment and eventually death — as sick chicks are unable to get to their feed and water. Marek’s is highly contagious and spreads via infected dust and dander. There is a vaccination available, but it’s not always effective.

A clean brooder is the best prevention, along with building a strong immune system (as mentioned above) with apple cider vinegar, garlic and probiotics. There is no treatment for Marek’s, but ensuring the infected chicks continue to eat and drink gives them a better chance at surviving.

Scissor or Crossed Beak is a deformity in which the top and bottom of a chick’s beak don’t line up properly. It is most often genetic and will likely worsen over time. Filing down the beak with an emery board as it grows can help it to close better.

Feeding the chick separately to ensure it’s getting enough to eat, moistening the feed and raising the dish to shoulder-level can all help these chicks eat more easily. As long as a chicken with cross beak is able to eat and drink, chances of survival are good.

Spraddle Leg is a condition that causes the chick’s legs to slip out to the sides, making it unable to stand or walk. Spraddle Leg can be caused by a vitamin deficiency or incorrect incubator temperature, but it’s usually caused by a slippery floor in the brooder. Covering the brooder floor with a rubber shelf liner or an old towel instead of newspaper can help prevent Spraddle Leg.

Separating the chick so it doesn’t get trampled, and wrapping a bandage or vetwrap around the chick’s legs to position them correctly for a few days is usually enough to allow the legs to strengthen and correct themselves.

Pasty Butt is a potentially fatal condition that occurs when feces gets stuck and dries, blocking a chick’s vent so it can’t poop.

More common in shipped chicks, and often caused by stress or temperature fluctuations, new baby chicks should be monitored for Pasty Butt for the first few days. Dirty vents should be cleaned off carefully with a cotton swab dipped in olive oil and rechecked and treated until it clears up—usually in a few days.

Cornmeal or ground raw oatmeal can help clear up Pasty Butt, as well as adding probiotic powder to your chick’s feed.